In my post ‘What’s the point?’ I mentioned three seemingly unrelated life-changing events: I met my wife, I started attending a regular business lunch, and I moved house.

The safety of the ’burbs

Until a few years ago Vanessa (my wife – and subject of a future post ‘Three life changing things, number three’) and I were living in Melbourne’s eastern ’burbs. Each weekday we’d jump in the Merc – with its lounge-chair-style comfort, sound-proofing and double-glazed windows – safely cocooned for the hour-long commute to work. I’d drop V off at the Dept of Justice then head to Southbank, park the car and take the elevator to my office in the IBM Tower. We’d each spend the day with high-powered, successful people doing high-powered important stuff before heading back home to the ’burbs again.

But all this commuting on top of our long working week was wearing us both down. We decided it was time to say “goodbye” to the commute and “hello” to a stroll; we ditched the house and took up inner-city apartment living. Our one-hour drive to and from work each day had become a five minute walk – in fact, if I started playing ‘Sweet Home Alabama’ on the iPod as I left home, it would still be playing as I opened the office door! Great huh?

Who are all these street people? 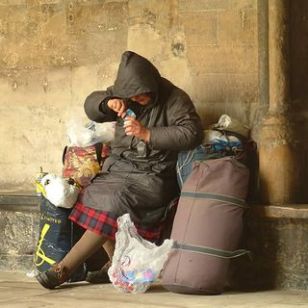 Sometimes, we need to get out of the car and closer to the streets to see the truth.

But one very big thing had changed – we were no longer cocooned. Walk out of our building, turn right and, more often than not, 20 metres from our front door-step there’d be a beggar sitting on the pavement with his dog and an up-turned hat with a few coins in it. Around the corner on Collins Street there’d be a woman selling magazines from a shopping-cart and another guy would walk up and ask for money. An IT geeky-looking guy would be sitting out the front of 7-Eleven with his hat on the pavement in front him.

Who are these people? Beggars at the ‘Paris’ end of town? Living rough? This is Australia for Christ’s sake [or insert preferred deity here] – we have the dole, and emergency accommodation! But they were everywhere. It didn’t make sense, or so I thought. But there seems to be a large gap between what services we believe there are against how effective they really are.

So I started paying a little more attention. Then I started saying “G’day”. And asking “How’s your day?” I wasn’t just randomly handing out money – I started to engage, and importantly, I realised these people are just like you and me. They’d just been dealt a bad hand or were down on their luck. It could happen to any one of us.

There’s Simon, a disabled pensioner, who’s a regular with Bull his dog; Margaret, selling The Big Issue; John, suffering severe short term memory problems; David, my IT geek looking mate that has now managed to secure accommodation. And the list goes on.

You may also want to check out http://www.theage.com.au/victoria/bull-the-bitzer-finds-a-friend-in-a-lady-20111208-1olhb.html. My next-floor neighbour, Lady (Primrose) Potter went to court to support Simon recently.

So next time you walk by someone sitting with an out stretched hand, just think, it could be you or me. But even that’s not life changing in itself.

OK, it’s an important realisation maybe – but no huge epiphany. It’s something we should all know, but perhaps we just don’t believe the statistics, or we simply forget.

The real life change has been for my kids – two girls aged nine and eleven.

Last Easter, the eldest, Ali, was given so many chocolate eggs she took them downstairs and gave them away.

This year the girls have decided they would like to cook a big pot of soup and dish it out to the homeless (we’re checking the legalities of this one).

And just the other day, Tori, after buying herself a Slurpee, opened her purse and gave away the last of her pocket money to Simon. When I asked her why she gave it away she said “It’s okay, Daddy, he needs it more than me”. And smiled innocently at me, as if everyone would know that. Dur.

And that, dear readers, IS life changing.

Filed under Everything else