Living with a Tesla #2 – A supercharged road trip 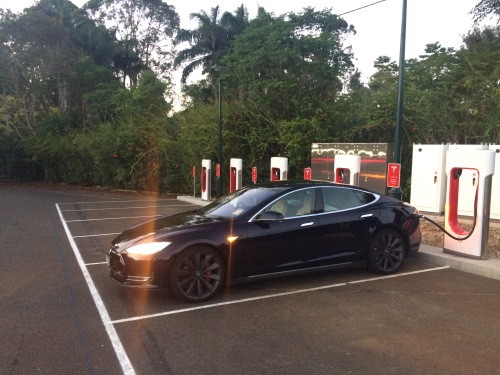 In this series of short blogs, I’m going to talk of our experiences living with a Tesla Model S P85D. I’m not going to wrap this in cotton wool. I’ll be honest about the pluses and minuses of being an early adopter.

In my last blog, I spoke about the 20 seconds I spend plugging-in and unplugging my car each day and how long the car takes to recharge is not important – it will be charged in the morning ready for another day. However, when you’re road tripping, charging times can come in to play. Today’s blog is about our 4500km road trip from Melbourne to Brisbane and back via Sydney and Canberra using Tesla Superchargers.

A Supercharger? Why would you fit a Roots blower on a Tesla?

Okay, for those who don’t know what a Roots blower is let me assure you that it’s not a deviant’s sex toy! And for our hot rodding friends (no no no, hot rod cars – geez, mind out of gutter please!), when I talk about a Supercharger I’m not talking about a belt-driven compressor sitting on top of a massive V8 – I’m talking about a very fast way to recharge a Tesla – a ‘Super’ Charger.

In Tesla’s own words ‘Superchargers are free connectors that charge Model S and Model X in minutes instead of hours. Stations are strategically placed to minimize stops during long distance travel and are conveniently located near restaurants, shopping centres, and WiFi hot spots.’

Tesla has a network of Superchargers between Melbourne and Brisbane allowing easy interstate travel. Later this year the route to Adelaide will be open and there’s talk of setting up stand alone (off grid) Superchargers right across the Nullarbor to Perth within a few years.

Hmmm, about that ‘conveniently located near restaurants’… true, but it works best to get there when they’re open. To be fair, we were travelling on public holidays and late into the evening! 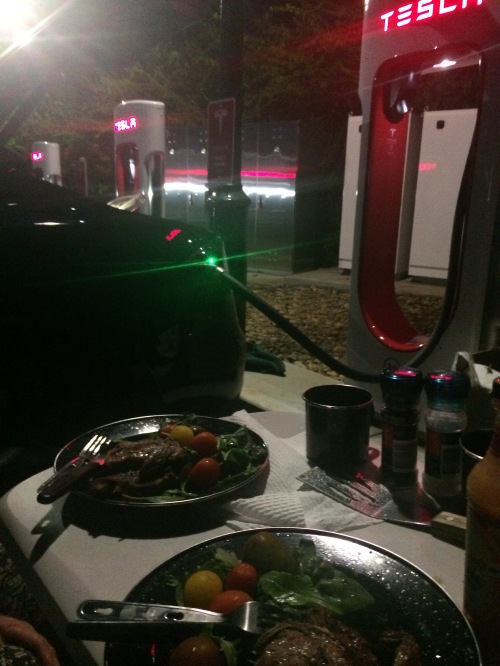 Restaurant closed? No worries, pull out the BBQ!

Everyone goes on and on about how important it is to carefully plan your EV holiday. Calculate your range. Know where to charge. Know where you’re staying. Have it all worked out… Boring! No!

If driving an EV is meant to be as convenient as driving an ICE then we should be able to just go for it too.

The tortoise and the hare

The comparison between road tripping in an ICE versus a Tesla is like the tortoise and the hare. Make no mistake, the ICE is the hare. Travelling 600 or more kilometres between refills will cover more ground than our Tesla tortoise, stopping every couple of hours for a 20-30 minute recharge. However, with these breaks from driving, and with the assistance of Autopilot, you can put many more hours behind the wheel each day and still feel as fresh as a daisy when you arrive.

We left at around 8-00am xmas day with the battery about 80% charged and drove directly to the first Supercharger at Euroa, about 150km up the Hume Highway. We plugged the car in and grabbed a late breakfast. 20 minutes later we had enough charge to continue to the next Supercharger. When road tripping using Superchargers you drive to a Supercharger and plug-in. Your car will tell you when it is charged enough to get to the next Supercharger and give you the directions. For our trip we stopped at Euroa, Wodonga, Gundagai, Goulburn and then we decided to skip Sydney and head direct to the NSW Central Coast – just shy of 1000km on our first day. That night we hopped on an ordinary plug and slow-charged so we knew we could easily drive into Heatherbrae (Newcastle) where the next Supercharger was located. From there we stopped at Port Macquarie, Coffs Harbour and finally Byron Bay before heading on to Brisbane that evening.

Getting home was equally relaxing with a detour to Canberra for NYE.

Here’s some random things that are good to know about Superchargers: 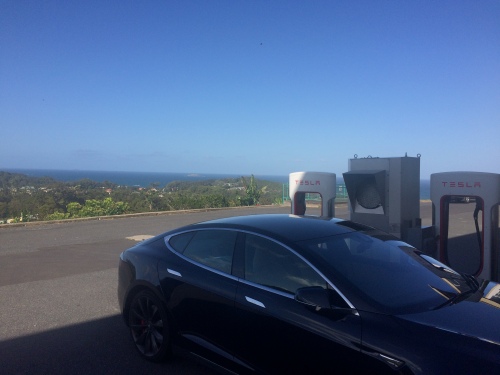 A Supercharger with a view. At the Big Banana Coffs Harbour.

In a future blog I’ll talk about our experiences road tripping off-piste; that is, away from the Supercharger network.

If you like this blog and wish to purchase a Tesla, use this link mark8478 to receive a $1400 (USD1000) credit towards your Tesla purchase.